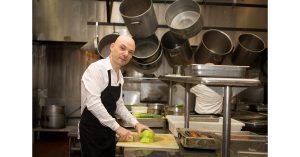 LOS ANGELES, CA, UNITED STATES, July 5, 2021 /EINPresswire.com/ — All across the country, companies have found themselves in a situation that was rare before the pandemic: they’re struggling to make jobs attractive enough for workers to take them. This dynamic is especially apparent in service industries, like restaurants and bars. The causes for the worker shortage are hotly debated.

Acclaimed restaurant owner Lenny Rosenberg has some serious thoughts on the matter and believes a solution is far away. “Employees are the face of your establishment,” states Rosenburg. “A lot of money has been thrown at restaurants like EIDL Loans, PPP & restaurant revival grants but all the money in the world cannot get an employee who is collecting free money not to work to come back anytime soon.”

Conservatives have identified unemployment benefits as the culprit for the labor shortage, and a lot of red states have decided to cut them off sooner rather than later. California fully reopened its economy on June 15 and did away with limits on capacity at restaurants, retail stores and other businesses. People are eager to return to sporting events and amusement parks and enjoy a meal out. But instead of full dining rooms, many restaurants are being forced to cut operating hours or leave tables open.

“Being the Michael Jordan of restaurants for the past 30 plus years it’s never been tougher to run a restaurant,” continues Rosenberg. “Employees are the core of the business; without them you are nothing.”

Restaurants in the United States gained 186,000 jobs in May according to the U.S. Bureau of Labor Statistics. More than 800,000 restaurant jobs have been added around the country in the first five months of 2021, but the National Restaurant Association says the industry remains about 1.5 million jobs below pre-pandemic levels. The National Restaurant Association also has reported the eating and drinking industry shed 2.5 million jobs in 2020.

“Turnover is a high cost for restaurants. That is an expense that if you incur over and over again because the working environment is not conducive to the worker, it’s not good for your business bottom line,” concludes Rosenberg.